How To Plant, Prune, Fertilize, Water And Care For A Japanese Plum Yew (Cephalotaxus)

Posted by Brent Wilson on 9/29/2016 to Fertilizing & Watering Tips
When planted right and in the right spot, Japanese Plum Yews, scientifically known as Cephalotaxus harringtonia, are exceptionally easy to grow.
Deep shade can be a challenge for gardeners, but the Japanese plum yews are lush, evergreen plants that perform well even in the shadiest spots. Their flat, needle-like leaves are a rich dark green and provide a unique texture and contrast in the landscape. They're an especially good choice for landscapes visited by deer, since deer turn their nose up to them.
Depending on the cultivar (variety), Japanese plum yew can be a groundcover, mid-size shrub, or small tree.
‘Prostrata Creeping Plum Yew' is a low spreading plant that grows to just a couple feet high and maybe 5 to 6 feet wide at maturity. An excellent front-facing plant or groundcover in the shade garden
'Fastiagata Plum Yew' grows to about 8 feet tall with a narrow, columnar form. It's a fine substitute for the 'Sky Pencil' Holly in shady areas. An exclamation point in your landscape!
'Yewtopia Plum Yew' grow to about 3-4 feet tall and wide. It is he South's answer to English Yews! With a slightly upright, vase-like growth habit, this plum yew is heat tolerant, drought resistant, shade loving, low maintenance, insect and disease resistant, and deer turn their noses up to it! What more could we ask for in an evergreen shrub?
Here's a breakdown of what you need to know regarding planting and caring for Japanese Plum Yews...
Cultural Preferences
Soil Preferences
In The Landscape
Japanese Plum Yews adapt to a wide range of soils. They prefer a moist, well-drained, sandy soil. As with so many other ornamental plants, constantly soggy or wet soil can and often will causes root rot and other harmful plant diseases. Plants have good drought tolerance when established.
In Pots & Other Containers
In containers, Japanese Plum Yews grows best in a very well-drained damp soil. Therefore, I recommend using a premium potting mix or potting soil, or a 50/50 mix of the two, in a container that has a drainage hole(s). More on planting in containers below.
How To Test Soil Drainage
If you are uncertain about soil drainage in the area you intend to plant your Japanese Plum Yews, it's well worth taking the time to test the drainage in the planting area before planting. To test soil drainage, dig a hole 12" wide by 12" deep in the planting area. Fill the hole with water and let it drain. Then, after it drains, fill it with water again, but this time clock how long it takes to drain. In well-drained soil the water level will go down at a rate of about 1 inch an hour. A faster rate, such as in loose, sandy soil, may signal potentially dry site conditions. A slower rate indicates poor draining soil and is a caution you need to improve drainage, plant in a raised mound or bed, or look for plants that are more tolerant of wet or boggy conditions.
Soil pH
Japanese Plum Yews grow best in an acid to neutral soil ranging between 5.0 to 7.0 on the pH scale. Most average garden soils fall between a pH range of 6.0 to 7.0.
How To Test Soil pH
Soil pH is a measurement of the alkalinity or acidity of soil and is measured on a scale of 1-14, with 7 as the neutral mark. Any measurement below 7 indicates acid soil conditions, and anything above 7 indicates alkaline.
If you're unsure about the pH of your soil, and whether or not it's suitable for growing Japanese Plum Yew, it's a good idea to test the soil pH in the planting area. You can quickly test soil pH with an inexpensive soil pH tester probe. To raise the pH (make more alkaline) you can add pelletized limestone to the soil. To lower the pH (make more acid) you can apply Soil Sulfur, Aluminum Sulfate, or Chelated Iron. Adding organic compost to the soil or using compost as mulch can also help to increase acidity and maintain acid soil conditions.
Learn More: What is Soil pH and How To Adjust It?

Light Preferences
Japanese Plum Yews will tolerate full sun in regions that have cooler summers, but prefers part shade conditions in hot areas. In our north-central Georgia gardens Japanese Plum Yews perform and look their best in morning sun with afternoon shade or filtered sun or full shade. They grow remarkably well under large trees, where many other evergreen shrubs won't grow.
Planting Plum Yews In The Ground
Scroll down for container planting instructions and care tips
Step 1
Start by digging your planting hole at least two to three times as wide and only as deep as the height of the rootball of your plant. The wider the hole the better. Place native soil removed from planting hole around the perimeter of the hole, in a wheel barrow, or on a tarp.
Step 2
Depending on the type, fertility and porosity of the soil in the planting area you might need to mix in a soil amendment to the native soil removed from the planting hole. When planting in dense clay or other poor draining soils it is beneficial to thoroughly mix in some good organic matter such as bagged top soil and/or a good planting mix at a 25-50% ratio with the soil removed from the planting hole. When planting in very sandy or quick-draining soil mixing in some top soil, peat moss and/or compost will help to retain moisture in the soil.
Step 3
Be very careful not to damage your Plum Yew when removing it from its nursery container. If the root ball is stuck in the pot it's best to cut the container away.
Step 4
If you are planting in well-drained soil, set your plant in the planting hole so that the top edge of the rootball is at or just slightly above ground level to allow for settling. If your soil is moderately drained, meaning it drains slowly after rain, the top of the root ball should be 2 inches or more above ground level, as shown in illustration below. If necessary, add some backfill soil mixture to the bottom of the hole to achieve proper planting height.
Note: If the soil is poorly drained (constantly soggy or wet) take measures to improve drainage or select a different plant species tolerant of wet soils.

Step 5
After setting your Plum Yew in the planting hole, use one hand to hold the plant straight and your other hand to begin back-filling your soil mixture around the root ball, tamping as you go to remove air pockets. When you have filled the hole to the halfway point you can soak the soil. Then continue back-filling to the top edge of the root ball. If you are planting the root ball higher than ground level, as shown in the illustration above, taper your soil mixture gradually from the top edge of the root ball to the ground level. To avoid suffocating your plant, avoid placing any soil on top of the root ball.
Step 6 (Optional)
When planting your Plum Yew in a site far away from a water source, and in well-drained soil, you can use remaining soil mixture to build a water retaining berm (catch basin / doughnut) that is 2 inches or so high around the outside perimeter of the planting hole. This basin will help to collect water from rainfall and irrigation, which helps to reduce the need for hand-watering. The berm can be removed after the first growing season.
Step 7
Next, deeply water the planting area, including the root ball, to a depth equal to the height of the root ball. For an extra boost, you can water your newly planted Plum Yews with a solution of Root Stimulator, which stimulates early root formation and stronger root development, reduces plant shock, and promotes greener, more vigorous plants.
Step 8
To conserve moisture and suppress weed growth, apply a 1 to 2" layer of cured, shredded or chipped wood mulch or pine straw around the planting area. Avoid the use of freshly chipped wood for mulch until it has cured in a pile for at least 6 months, a year is better. Avoid placing or piling mulch directly against the base of your plant as this could cause the bark to rot.
Planting Plum Yews In A Container
Plum Yews growing in pots or other containers appreciate a moist, but well-drained soil. Constantly soggy soil can and often will cause root rot or other harmful or deadly plant diseases. Therefore, to ensure good drainage, use a pot with a drainage hole(s) and a quality potting soil or potting mix, or a 50/50 combination thereof, for planting. Optionally, you can also add some pumice or perlite (maybe 10 to 20%) to the soil mixture to help with drainage.
Choose a container that is large enough to allow for 2 to 3 years of growth before having to shift up to a larger size container. This might mean your planting pot would be 6 inches or more in diameter (width) than the root ball of your plant.
Container color will matter as well. Not only will you want to pick a color of container that goes well with the foliage color and texture of your Plum Yew, you'll also want to pick a container that matches the style of your home or other structures and other plants in the surrounding environment.
Many nursery & garden centers offer a wide variety of containers to choose from. Before heading out to buy a container take pictures of your home and the surrounding environment. Doing so will help you to choose just the right color and style.
Container Planting Instructions
Step 1
Before filling your container with the soil mix, I recommend lining the bottom with shade cloth or a porous landscape fabric. This will keep the drain holes from becoming clogged with roots and soil. If you use gravel or rocks in the bottom of the container lay the fabric on top of it.
Step 2
Be very careful when removing your Plum Yew from its nursery container. If the rootball is stuck in the pot cut the container away.
Step 3
Pour a small amount of your soil mixture in the bottom of the container. Set your plant in the container and make necessary adjustments by adding or removing some soil so that the top edge of the root ball will sit approximately 1" below the rim of the container. 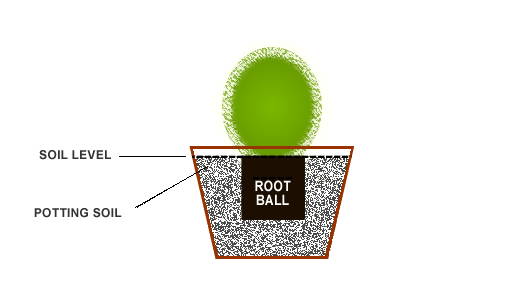 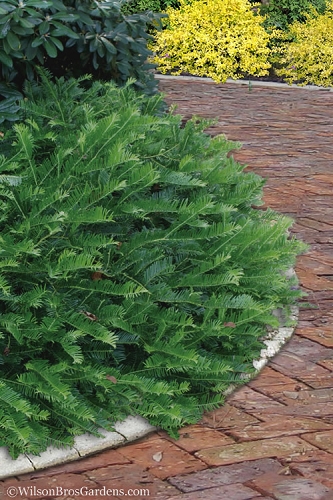 Yewtopia Plum Yew - 3 Gallon Pot
FREE SHIPPING
Temporarily Out of Stock. Click button below to get on the Waiting List!
(5)
Sizes & Prices 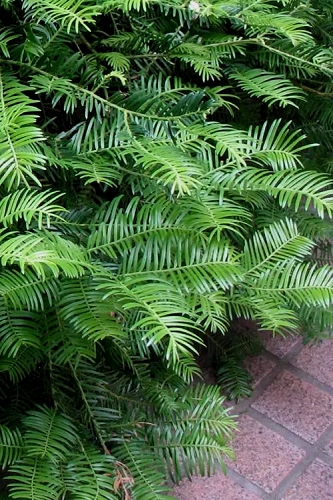 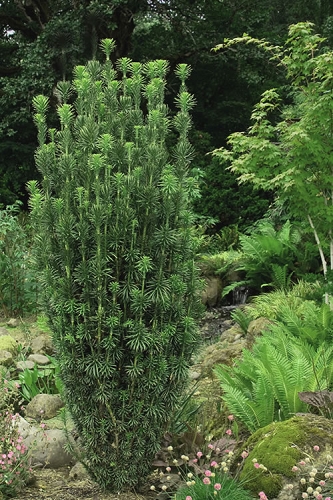