How To Stop Bamboo Plants From Spreading

Posted by Brent Wilson on 9/27/2016 to Planting & Growing Tips
When some folks think of bamboo they see horrific visions of an out-of-control forest. This is true for those who plant "running" types bamboo and either abandon or mismanage it. But there are some fairly simple ways to control the spread.
If you love the look of bamboo and would like to plant it in your garden, and don't want to install underground rhizome barriers to control spreading, you might take a look at clumping bamboo, which are non-aggressive and tend to stay in neat clumps. That said, many of the clumping bamboo aren't cold hardy north of USDA Zone 8b.
When researching the many genus of bamboo plants, you might fall in love with some of the attractive running bamboo. If so, know that there are planting methods using rhizome barriers or natural pruning methods that can be used to control the spread of running bamboo.
There are two basic methods for naturally controlling the spread of bamboo rhizomes (roots):
1. Aborting New Shoots
This practice is an easy way to control your bamboo grove. It simply involves destroying new shoots. New shoots emerge only one time a year in spring and are easiest to remove after they have reached about 6 to 12" tall. New shoots have a very high water content to support the rapid grow that bamboo undergoes in its first 60 days of life. During this fragile time bamboo is very easy to abort and control. Once aborted the cane will never grow again.
First, identify unwanted shoots: those that emerge outside of your desired growth area.
New shoots are fragile and can be easily removed. A swift kick can even remove the largest of shoots. A swing blade or bush axe can also get the job done.
New shoots can also be removed easily with a lawn mower, however some areas can be difficult to mow. A weed eater with a blade attached can be used in these areas.
Once all the new shoots have been removed in the spring, you will be done until next spring. Occasionally, you will have a couple of late shooters but the majority will happen in the spring.
Also keep in mind that most all bamboo shoots are edible which can be an added bonus if you are inclined.
2. Root Pruning
Rhizomes, which are essentially underground roots, can be cut to prevent bamboo from spreading. This method can be used when bamboo has been planted close to a property line. Using this method can help prevent rhizomes from traveling into undesired areas. If the rhizomes can't establish themselves in unwanted areas, they cannot produce canes there.
To keep bamboo from spreading, you can root prune with a spade. Just push the spade into the ground cutting through the rhizomes. Overlap your next cut. Continue until you have worked all the way around the perimeter or border. It is a simple method and will work if done correctly twice a year, mid to late summer and in the fall. This is a great way to control bamboo in the hard to mow areas.
Okay, so there's one more method for controlling the spread of bamboo, which takes some work but once its done there's no more to do.
3. Bamboo Root Barrier
Last but not least, if you want to plant a running variety of bamboo but want to contain it in a given space, you can use Bamboo Root Barrier to prevent the roots from spreading.
Related Articles
How To Plant Bamboo Plants In The Ground
How To Plant Bamboo Plants In Containers & Pots
How To Fertilize And Water Bamboo Plants >
How To Prune Bamboo Plants >
Questions?  Contact Us
Previous Post
Next Post 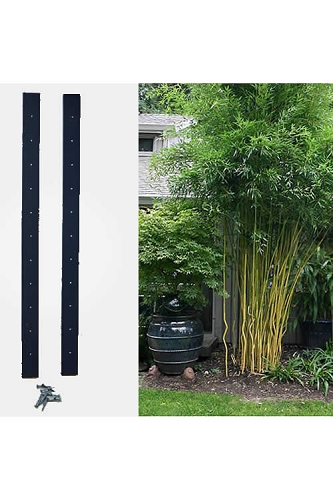 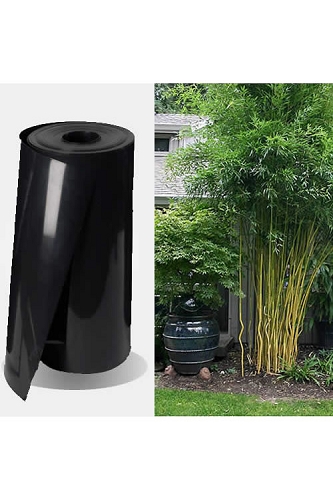 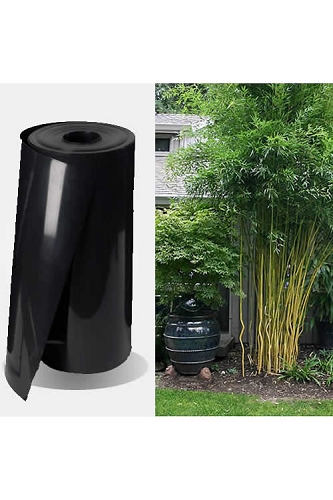