How To Prune a Plum Tree

Posted by Brent Wilson on 12/12/2016 to Fruit Gardening
To produce healthy fruit, plum trees will benefit from a yearly pruning. That said, you don't have to prune them. The Vase Training Method presented here produces a vase-shaped tree consisting of 3 or 4 scaffolds (main branches) of equal lengths and no central leader (vertical growing top central branch).
When To Prune
You'll want to prune plum trees in late winter before new leaves begin to emerge. This is typically February, but adjust this time based on your local weather. At this time it will be easier to detect buds that have been damaged by cold weather. If a flower bud looks as though it has been winter-killed, cut it off. Also cut off winter-killed limbs that have wrinkled bark.

NOTE:  To avoid risk of disease, prune plum trees on a dry day.
Pruning Instructions
Young or New Trees
If you have purchased bare root trees follow the instruction below for initial pruning at time of planting:
Small Bare Root Liners:  These are single-trunk "whips" that usually have no side branches and should be topped at 30 inches above ground at planting time. The shoots that will become the main scaffold branches of your tree will usually emerge on the trunk within 4 to 6 inches below the cut. 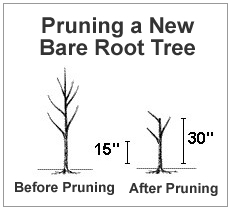 Larger Bare Root Trees:  If the bare root tree is branched when it comes from the nursery, select three or four lateral branches growing with wide-angle crotches (greater than 45°) spaced evenly up and around the trunk. These will be your permanent main scaffold limbs. The lowest limb should be about 15 inches above the ground and the highest about 30 inches from the ground. If no desirable laterals are available, top the tree to 30 inches in height and cut out all side branches to a point where there is only one bud left on the branch. A shoot will often develop from these buds and may be suitable for main scaffold limbs.
Container-Grown:  Many container grown trees that you purchase from a nursery are 2-year old trees. If they were pruned properly by the grower these older trees will already have strong branches with wide crotch angles.

During the first dormant season (winter) after planting, these branches should be pruned back (headed) to a point that leaves 6 or 7 buds on the branch. The height at which branched trees are headed depends on the size of the tree and the positions of good side branches. Remember, you will only be keeping 3 or 4 main scaffold branches. It's best if these are spaced evenly around the trunk. Remove any weak branches growing from the trunk and any suckers growing from the base.
Second Dormant Season
During the second dormant season, in mid-February to early March, start pruning by removing diseased, broken and low-hanging limbs. Next, to develop an open-center, vase-shaped tree, remove vigorous upright shoots that may have developed on the inside of the main scaffold branches. The tree shown in the image to the right shows what a plum tree might look like at the end of the first growing season, and what it would look like after pruning in late winter. 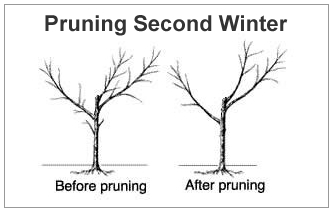 Plums are produced on wood that grew during the previous season. Once the scaffold system of the young pplum tree is established, prune as little as possible until the tree becomes mature enough to fruit, usually the third or fourth year.
Pruning Thereafter
Follow the same principles used after the second growing season. The objective is to open up the tree to allow sunlight penetration and air movement and to improve spray coverage. When the tree is well-grown, pruning consists mainly of moderate thinning and heading cuts back to outward-growing laterals to keep the tree low and spreading. A height of 8 to 9 feet is preferred. 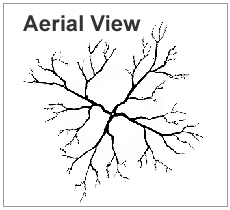 Start by removing low-hanging, broken, and/or diseased limbs. To maintain the open center, remove any extremely vigorous upright shoots developing on the inside of the tree, leaving the smaller shoots for fruit production. Cut them off close the the branch.
Prune out poor-quality fruiting wood, such as shoots growing off the branch that are less than pencil-size in diameter or branches that hang downward and are shaded. The desirable wood left for production should be about the diameter of a pencil and from 12 to 18 inches in length. If the length exceeds 24 inches, cut off about one-third of this fruiting branch.
Finally, prune the vigorous upright limbs growing off the main scaffold branches by cutting them back to an outside-growing shoot.
Thinning Fruit
When a plum tree is healthy and growing conditions are favorable, sometimes the tree will set more fruit than the branches can handle. Branches may break and the fruits typically have poor color and taste. To prevent limb breakage and ensure good fruit quality, excess fruits can be removed or thinned. Hand-thin the tree about four weeks after full bloom, spacing the plums about 6 inches apart on the limb. When thinning by hand, grasp the stem or branch firmly between the thumb and forefinger and pull the fruit off with a quick motion of the second and third fingers.
If all of this sounds like too much for you to handle, contact your local arborist or local Extension agent for further consultation.
Related Articles from Our Experts
Previous Post
Next Post